Mary Cummins, real estate appraiser, Cummins Real Estate, Animal Advocates, commits MALICIOUS defamation!!!  There is no interpretation of the law that will free her from her crime this time because she is a repeat offender.  This could actually land her in jail.

Mary Cummins knowingly and with malice and forethought took an email from USDA veterinarian, Laurie Gage, and posted it all over the Internet, in court papers and wherever else she could banter the error ridden internal communication.  Well, you say, if Laurie Gage, DVM, wrote it why is Mary Cummins at fault?  Because Mary Cummins had the other emails exonerating Amanda Lollar and particularly the email wherein Laurie Gage admitted her assessment of the falsehoods Mary Cummins submitted to the USDA was WRONG.  She deliberately posted erroneous, damaging information about famed bat expert, Amanda Lollar.

I guess having a $6 MILLION DOLLAR judgment against her was not enough.  Here is PROOF of Mary Cummins’ actions and why she cannot hide behind her flimsy attempt at becoming a “media personality” in order to enjoy additional protection, for journalists, under the First Amendment Right of Freedom of Speech.  Malicious defamation does NOT cross any media thresholds and that is what the inept Cummins will not accept.  If false remarks or even opinions are made with the intent of doing harm, according to the law, it does not matter if you are King of the Universe because you will be held accountable.  According to the law, Mary Cummins is looking at 5 years for each count of perjury, and there are many.

Mary Cummins is/was President of the now defunct Animal Advocates in Los Angeles (the USDA noted “no animals present” during a surprise inspection).  Animal Advocates, the so-called ‘charity’ Mary Cummins established, makes the claim that they are always “full” despite the fact they never post pictures of their supposed facility or the animals in their care or the animals they supposedly rescued and released.  No new pictures have been seen in YEARS! Have you witnessed any other animal organizations REFUSING to help needy animals because they are “full”.  I do believe this is a case of ‘how can I conceal what I am not doing and still collect donations.’ 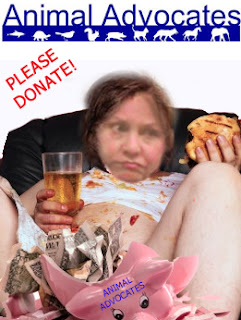 Given the number of blogs, tweets, etc., that Cummins engages in on a daily basis, I do believe everyone accepts that you have to have money to do nothing all day, every day.  By the way, have any of you seen Mary Cummins around town in her black robe and headdress?  It is hysterical.  As much as she may try, you just can’t hide the face of a skank.

BUT back to the heart of the matter……since 2010 Cummins has flagrantly, maliciously, intentionally continued her defamation of Amanda Lollar, Bat World Sanctuary, and famed animal rights attorney for Bat World, Randy Turner.  Even after the Supreme Court of Texas (yes, Cummins took it all the way to the Supreme Court) upheld the Appellate Court decision, that the evidence in the 4-day trial proved her guilt, Cummins to this day continues to post malicious defamation.    Hence, Cummins is back in court again fighting another defamation lawsuit that she will DEFINITELY lose.  The worst of what Cummins posts is what she claims to be an email from USDA Big Cat Specialist veterinarian, Laurie Gage, (who viewed an altered video sent to the agency by Cummins) stating that Amanda Lollar was guilty of “violations of the Animal Welfare Act”, amongst other false charges.

In actuality, the email Laurie Gage sent AFTER the head of the USDA, Dr. Robert Gibbens, came down on her for her uneducated review of the altered video, is what Mary Cummins has tried to keep hidden.  Here it is, a proper accounting of Amanda Lollar’s TALENTS; not her alleged violations as Cummins has tried to portray all over the Internet. 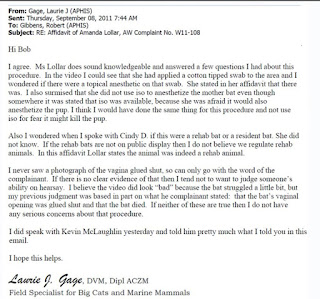 Read these words taken from the Appellate decision, upheld by the Supreme Court:  “The evidence supports a conclusion that Cummins engaged in a persistent, calculated attack on Lollar with the intention to ruin both Lollar’s life’s work and her credibility and standing in the animal rehabilitation community.”  “Cummins posted innumerable derogatory statements about Lollar impugning her honesty and her competency, and she repeatedly and relentlessly reported Lollar to multiple government agencies. The comments she made about Lollar leave no doubt that she had a specific intent to cause substantial injury or harm to Lollar.”

Well followers of the dark, dank world of Mary Cummins, no wonder Mary Cummins is under the care of a psychologist.  Cummins keeps doing that which secured a $6 MILLION dollar plus judgment against her (now $8,600,000 because of the $50,000 per month interest associated with the judgment as long as the judgment goes unpaid).    The judgment CANNOT be discharged through bankruptcy (Cummins tried), nor will it ever go away with time (by law it is renewable every 10 years as long as the hag Cummins is alive).  Cummins speaks LIES, falsehoods, and malicious defamation from her aged, artificially plumped lips and she thinks she can keep doing it without consequence.  Cummins is (by her own statements) a deadbeat, has been charged by and reprimanded by the CADFW for abusing animals, and Cummins was refused licensing by that same state animal agency.  Then there is the stellar admission, again in court documents and on video, wherein she claims that she does not pay for her own vacations because “They were paid by different men.”  I guess it all just adds to the cesspool of her existence, doesn’t it?

One more time, read what the final decision was after the up to 250 complaints Cummins made to the USDA about Amanda Lollar.  After the approximate 100 times she reported Amanda Lollar to the Texas Parks and Wildlife, to the IRS, the Global Federation of Animal Sanctuaries and any other government agency and animal rights organization she could find.  Yes, it clearly states, “Ms Lollar does sound knowledgeable and answered a few questions I had about this procedure.”  “I never saw a photograph of the vagina glued shut, so can only go with the word of the complainant (Mary Cummins).  If there is no clear evidence of that then I tend not to want to judge someone’s
ability on hearsay.”  Sadly the USDA was unaware that Amanda Lollar had a multi-million dollar lawsuit against Cummins and Cummins was bent on destroying Amanda as the Superior Court, Appellate Court and Supreme Court recognized.

Remember, just when you think you have seen it all, looking at the bottom of the barrel, you have not unless you are looking at Mary Cummins’ face. 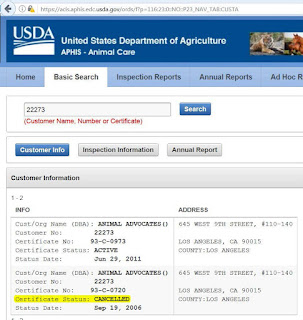 
Well, followers of the dark, dank, delusional world of Mary Cummins, I have nothing else to say because the lying Mary Cummins has said it all for us. Enjoy the links!
Posted by Rachel at 9:39 AM No comments: