The Reality behind MARY CUMMINS, MARY CUMMINS-COBB, MARY COBB, the  indigent real estate appraiser, supposed paramedic, supposed investigative reporter, and supposed animal rescuer (who has not recued anything in years by her own admission).  Oh, I nearly forgot another one of her claims to fame is being a Freedom of Speech fighter.  However, sadly, Cummins does not know the difference between Freedom of Speech and egregious, malicious defamation.  So inmates, be forewarned about taking advice from Mary Cummins when you cross her path.

How is it Mary Cummins claims she was a “Top ten AAU swimmer in the United States” when there is absolutely no record of it whatsoever?  Did she do commercials for this skill?  No.  Does she receive compensation for it?  No.

How did Mary Cummins become a “paramedic” at the age of 15 when you are required, by law, to be 21 and highly trained and according to records Cummins has never held a position as a paramedic?  Has she been paid as a paramedic?  No.

How is it Mary Cummins claims to have attended COLLEGE at the age of 15 on full scholarship yet her school records show she graduated HIGH SCHOOL at the age 18?  There are no records of Mary Cummins having a college degree in anything.  So how does one attend college “at the age of 15”, on a full scholarship, as Cummins advertises far and wide, and not obtain a degree?  Has she been paid as a professional with a 4 year college degree in ANYTHING?  No.

How is it Mary Cummins, to this day, still promotes the fact that she was Junior Mensa when there is no such thing (according to the folks at Mensa!)?

How can Mary Cummins claim to be an “investigative reporter” when all she does is repost stories from other sources, spend an inordinate amount of time in Ancestry researching individuals family tree’s to post on the Internet (who cares?) and she does not receive a dime in compensation from any legitimate news outlet as a salary or even as a free lancer?  Are you truly a professional if you are not paid as one?  Are you a reporter if you have not been paid to be a reporter?

After stating her own mother was DEAD for years, she has now resurrected her and is declaring she is a socialite in Santa Barbara.  So why is Mary Cummins homeless and broke if her dead, er very much alive, mother is a socialite and part of the elite of Santa Barbara?  Oh, that reminds me…..Cummins claims her “Nana” was a super successful immigrant who owned many properties and taught her how to manage money.  OMG, my sides are bursting at this one.  Seriously?  Pay attention, Scummins, your education is lacking, your skillset appears to be non-existent, you claim you are indigent and homeless in an America where there is a plethora of jobs AND the housing market is at an all time high.  LOSER.

Well, while we are going down memory lane, remember how Mary Cummins use to continually refer to her “former husband” and her “marriage”?  There are no records of Mary Cummins-Cobb every being married.  In court testimony I guess she slipped because she admitted her “husband” was actually married to someone else (not her) and he was just stopping over as Mary was open for business.

Oh, remember Scummins claims of being the biggest supporter of Animal Advocates, the defunct non-profit she bilked for years?  Well, it looks like she ran them dry.  In court documents she claims Animal Advocates has a bank balance of zero.  Remember the car for which she solicited donations?  Now, she claims the car is hers.  How convenient she owns a car AFTER Animal Advocates paid for it!!!

How is it LA Business Journal gave Mary Cummins a “Real Estate Award” and a “Woman of the Year” award, promoting the success of those who are recipients?  Oh, I forgot, you have to buy those awards.  What a shame homeless, indigent Mary spent money for awards that mean nothing.


What a total loser.  Unsuccessful at everything she has ever tried.

• Real Estate – lost her license.
• Real Estate Appraiser – LOL
• Animal Rescue Non-Profit operator– ran it into the ground with a zero net worth.
• Lecturer – the CADFW would not give her an educational license.
• Reporter – no one would hire her.  Just because you say you are a reporter does not mean you are a reporter.
• HSUS Animal Rescue Team - claims she is on the HSUS Rescue Team (but she has not been to any disaster relief area or on any assignments in nearly a decade).  I think the team dropped her but Scummins just forgot.
• Police Trained – she took a few courses and the academy was shut down for improprieties.

What will be her new invention, Queen of the Universe?  According to Scummins play book if you claim you are something, you just are. 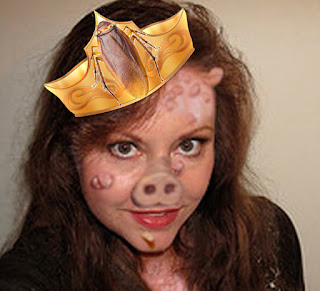 Yes, I do believe that list says L-O-S-E-R!!!!  Well, followers of the dark, dank world of Mary Cummins, it just keeps getting darker but roaches love the dark so I guess Mary is happy being a legend in her OWN MIND and admired by no one.