Well, well, well. Apparently Mary Cummins has been committing outlandish donor fraud, fraud upon the courts, and perjury. According to a recent court document, this ridiculous excuse for a human has been using her non-profit organization Animal Advocates as a personal piggy bank!

And I quote “Funds which were donated to this“non-profit” organization have been used by Defendant to purchase such things as services at a weight loss clinic, lip plumping, a financial advisor, liquor, haircuts, fast food, real estate expenses, an actress listing for Mary Cummins in IMDB, ancestry.com, peoplefinder.com, and personal legal expenses. The records show that Defendant uses Animal Advocates as a veritable piggy bank to siphon off funds that were intended by donors to go to a tax-exempt, non-profit organization.”

That would total thousands of dollars in donor and probably grant money.  It does not get any lower than taking money away from deserving animals. People donated to Animal Advocates in the hopes they were helping orphaned and injured animals and instead they were paying for Cummins trip to a fat farm, plumping her lips, buying wine & cheeseburgers, spying on people and paying her extensive personal legal expenses.

And just when you think it can't get worse, Scummy Cummy just claimed in court that she resigned from Animal Advocates in 2012, yet she has continued to steal donor money ever since (see page 9).

This is a lesson for Mary Cummins in “Do not pass go, do not collect $200” because you are soon to be in a striped suit. Ha!

Thank heavens for Randy Turner and his tenacity for the fight of good against evil. It is the age-old decent triumphing against the immoral and it is being done by the original underdog in the fight (Amanda Lollar), a stellar animal rights attorney (Randy Turner) and the dream team they have put together.  Meanwhile, the idiot Cummins overwhelmingly underestimated Turner and Lollar, and stupidly spent her time posing for photos with a penis and allegedly getting botox injections using donor money.

I do believe this is what one would call a brilliant example of a legal "smack down"!
•  1. A bitter contest or confrontation - "the malicious Mary Cummins versus Randy Turner smackdown"
•  2. A decisive or humiliating defeat or setback - “Mary Cummins, “I always represent myself pro se; I always win” suffers a humiliating defeat when the truth of her dishonest actions are presented to the Texas courts.”

Well followers of the dark, dank world of Mary Cummins, it took a while but you are all now witnessing the ultimate fall of the most malicious troll on the internet. More to come.
Posted by Rachel at 1:23 PM 1 comment:

Let's just break down what is really going on with this statement of/by/for Mary Cummins on her fake Facebook animal "advocate" page.  "We are still totally full as are most other rehabbers."  Translation:  Mary Cummins is too caught up in multiple lawsuits against her to function as an animal rescuer.  Note that she is telling people to read her 'manual for squirrels'.  What about the other animals they find?  What about giving people contact information for other rehabbers or her 'volunteers' so injured and orphaned animals do not have to suffer while individuals try to find help?  What about the fact that she is instructing the general public to rehab without any licenses or protective rabies vaccine?  "Mary Cummins is still out of commission waiting for back surgery."  Translation:  Mary Cummins is too lazy to do anything.  Does she think no one keeps track?  She has been "awaiting back surgery for 5 years!!!!!  Here's a clue, Mary, the jig is up about the phoney problems with your back.  Even free health insurance does not make you wait 5 years.

"As stated she handed over all duties to volunteers months ago."  Translation:  Say what?  There is but one (1) volunteer listed on her license.  Her Vice President, MaryEllen Schoeman does not even have any rehab licenses AND HER USDA LICENSE WAS CANCELLED!

Where are pictures of these volunteers working so hard?  Mary Cummins is only posting pictures from 3 to 10 years ago.  "For this reason we are not currently taking in any adult coyotes or bobcats."  Translation:  Mary Cummins is in trouble with the authorities for lying on her annual reports to CADFW and she is probably in more trouble since they realized she likes to play with dead animals. Click here to read the numerous permit violations Mary Cummins has committed.
How can she make these statements and claim to care about animals?  I know animal rescue workers that function out of a wheelchair prop themselves up at a counter just to give aide to injured animals.  Good grief she is some 'animal advocate'.  According to her she has but one herniated disc that she has had for years now so why is she not helping animals in need?  I mean she sure seems able to type and tweet up a storm everyday to give her opinion on.....EVERYTHING.  And I think we are all familiar with her 'other activities'.  What a loser.

Posted by Rachel at 3:04 PM No comments:

On July 27, 2015 Mary Cummins proclaimed on her Facebook page that she is a “news personality”. Amateur psychologists speculate that she may have suffered a psychotic episode and now actually believes she is a celebrity television newscaster named “Trixie.”

This unemployed cyber troll has also begun hilariously calling herself an “investigative reporter.” The majority of her victims, however, say these are obviously farcical attempts to look like a member of the “media,” as if such a self-designations will somehow magically transform her legal status as a prolific defamer and give her greater legal protection against future defamation lawsuits. In other words, “If I call myself a ‘news personality’ and an ‘investigative reporter’ then I will be a ‘media defendant’ the next time I get sued for defamation.”

This is consistent with Mary Cummins’ laughable disclaimer on her defamatory blogs stating, “Everything is the truth to the best of my knowledge…the rest is my personal opinion and belief…these are items of public interest and concern…everything is public information,” etc., as if such self-serving declarations somehow immunize her from liability for defamation. In other words, “If I announce in advance that everything I say is protected speech or true then I can defame anyone I want with impunity.” Alas, the cyber-troll’s google-knowledge of the law of defamation resulted in a $6 million bankruptcy-proof judgment against her and an official court ruling that she is a “malicious” liar. 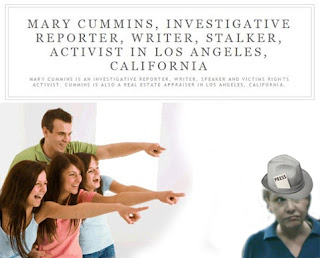 Posted by Rachel at 1:25 PM No comments:

Public figure, Mary Cummins, posted a letter from Ed Boks, with the city of Los Angeles, supposedly to prove her value as an ‘employee’.  LOL.  So Cummins wants us to believe this is a letter affirming her "talents".

OMG.  Remember Cummins sued the city of LA just a few months later for being FIRED from her volunteer position for poor performance and for causing dissension among city employees (read the court document).  This is the same Ed Boks, whose signature appears on this “letter of recommendation”, whom Cummins charged with sexual harassment!!!!  She also said Boks was drunk most of the time.  (NOTE:  Her words, not mine).


So this man, who Cummins claims is a drunk and a lech when she needs easy money from a settlement, is the best of the best when she wants a Letter of Recommendation (which I imagine she wrote herself for his signature)?  Although he did recommend her as a cage cleaner so maybe it is legitimate.  We all know Cummins is a good candidate to smear poop all over the place, after all, she is obsessed with the stuff and she did say urine and guano rained down into her mouth when she was at a wild bat sanctuary and oddly enough it did not bother her.  The other docs she posted with this one never even mention her name.  I have to stop now; my sides are hurting from laughing.

Well isn't this interesting.  Self proclaimed animal advocate, Mary Cummins aka Mary Cobb, the president of Animal Advocates in LA, Cummins Real Estate Appraisals claims she supports the cause for animals but this statement is greatly disputed by California Department of Fish and Wildlife.

Cummins has been repeatedly cited for abuses, lying, claiming to be caring for animals she previously reported were dead and touts caring for "over 1,000 animals per year" all while she claims to the court system that she is bedridden! This is why Mary Cummins is not allowed to have an educational license.

This may come as a shock to anyone from whom she claims to have received a grant.

3/2/2016 UPDATE: Self appointed investigative reporter (ahem) Mary Cummins, Mary Cobb, Cummins Real Estate Appraisals, Animal Advocates, is posting about someone who has a $6 million dollar bail. Could it be Mary Cummins’ fascination with this case is because of her own $6 million dollar judgment against her???

Don’t you find it odd that Mary Cummins is posting about another $6M legal issue? I mean why? Scummy Cummy has her own $6 million dollar judgment against her. Shouldn’t she be concentrating on paying that down? She claims it is a “financial death sentence”. I guess the self proclaimed ‘indigent’ real estate appraiser and self proclaimed animal rescuer (who was charged with animal abuse by CADFW, including the abuse of a squirrel with no eye balls), is trying to focus on others instead of concentrating on her own multitude of issues. Oh, wait, Scummy has to pay $25,000 per month interest on that judgment from Aug, 2012 forward so the judgment against Scummy Cummy is now $7,075,000. Maybe the idiot Cummins is just trying to remember how nice it was when she only owed the $6 mil! LOL 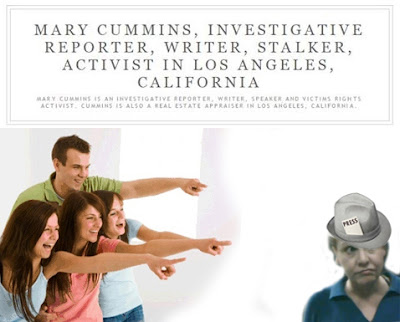