The never married, I-stalk-other-women's-husbands Mary Cummins (born Mary Cobb) LOST her Appeal to obtain a restraining order against Amanda Lollar, and Scum-dum Mary Cummins was ORDERED to pay Amanda Lollar’s attorney fees!  Say “YES.” Don’t you just love it when a roach has to pay for its dirty, slimy deeds?  I know, I do. I wonder if Cummins now qualifies for vexatious litigant status after bringing yet another frivolous actions against the innocent? Just with the actions in which she has been involved with Bat World I believe the count is at 6 or 7 (not to mention the over 30 lawsuits in which she has been involved in her 50 years on this planet.

Enjoy the Appellate Court order wherein it clearly states that Mary Cummins proved nothing and the lower courts’ ruling was upheld.  Judge Carol Boas Goodson did not take any BS from Cummins and ordered the self-proclaimed (alleged) poverty whore* to get out and get a job so she can pay Bat World’s attorney fees. 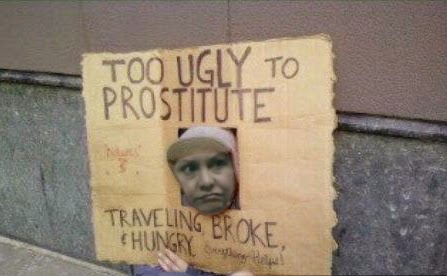 Well, followers of the dark, dank world of Mary Cummins, look up ‘ambulance chaser’ in the dictionary so you can see a recent picture of Mary Cummins.  In case you missed my earlier reference to Mary Cummins as the Queen of Communicable Diseases, it is all explained in this blog.  You will get a clearer understanding why that reference has been associated with her name.  For even more fun, or if you are new to my page, make sure you get a good laugh viewing Mary Cummins claim of her ‘natural beauty’ and her Kmart blue light special of a boob job.

Scummy Cummy aka 'the Roach" likely now lays awake at night dreaming of yet another scheme to try and destroy Amanda Lollar. Meanwhile, Lollar just has to be smiling while watching the roach squirm. I know I do.


*A poverty whore is a woman who constantly proclaims she is poor when she is not so she can get a free ride in life, and game the judicial system.  Poverty whores cost taxpayers a great deal of money.  In Mary Cummins case she pays over $2,000 per month in rent; she claims she lives in Bel Aire (one of the richest communities in America), she drives a Prius, eats out, shops at high end markets and she does not work. See what I mean? She brought a personal injury lawsuit against Bat World Sanctuary (only after they sued her and ultimately secured a $6.1M judgment against her for her malicious defamation). Then, in order to prevent them from obtaining her financial records (which defendants have a right to secure from a Plaintiff when they are being sued) Scummy Cummy immediately dropped her claim for financial damages.  Mind you this is a woman who had repeatedly stated that she was broke because she could not work and yet when she found out the defendants could subpoena her financials she immediately changed her tune and dropped the claim of any financial loss.  How does someone allegedly become injured to the point where they cannot work (as Mary Cummins claimed) and not pursue financial damages.  Because she is a poverty whore who lied about her finances, working, as well as her alleged injury.  You can read the entire case file through the Pacer records system.  The case number is 4:2012-cv-00560.  /