Best of all is Mary Cummins’ excuse for the SCOTUS, the nation’s ultimate court for justice, DENYING her Petition (in her own words): “Supreme Court of the US has declined to hear the case. Most likely reason is that it only deals with one state, Texas. For the SCOTUS to take a case it must deal with a few states.”  LOL!  Seriously, it was DENIED because it only dealt with one state?  What a complete moron.  Would you like me to list case law on the number of issues the Supreme Court has dealt with concerning one state?  I guess because Mary Cummins has never succeeded at anything she thinks other people are as stupid as she is and will believe her utter nonsense.  What a pathetic dope.

Gosh, I hope I can get them all on one page.  Yep, count them, 18 courts each with a separate case number.  That means every single time Mary Cummins has gone up against Amanda Lollar, Scummy Cummy has LOST.  Not just by a little, but a lot.  Why do you say “by a lot”, you ask?   Because Cummins has not only LOST in District Court, LOST in Superior Court, LOST in Appellate Courts in 2 states, LOST in Supreme Courts in 2 states, but now she has LOST in the highest court in the land, the Supreme Court of the United States!  Best of all, there will forever be a record of it all.

NOTE:  These are only the outcomes of the actual cases, it does not include the over 1,000 frivolous motions filed by Mary Cummins in these cases, all of which she also LOST.

So what is the moral of the story, “Is it unwise to go up against Amanda Lollar and her team?”  Well probably, but the moral of the story, in more succinct terms, is that despite being involved in nearly 35+ OTHER lawsuits, involving her many victims, in her nearly 60 years on this planet, Mary Cummins is a ‘know-all, know nothing’ dunce who is incapable of keeping her own lies straight from one document filing to the next.  What other lawsuits?  Oh gosh, off the top of my head they include, but are not limited to, her own mother, her sister, Mary Cobb, Edward Katz Hair Design (God knows she needs some new hair), the Catholic Church, the Daughters of America, Juliette Cummins, Jason Simas (her neighbor who she claims wanted to cut off her husband’s penis but remember, Cummins has never been married), Beverly Hills BMW, American Express, Eric Schmidt (the CEO of Google), etc., etc., etc.

Well, followers of the dark, dank world of Mary Cummins, the next few months should be V-E-R-Y interesting.  I leave you with several questions:

1)      Will the courts bring the long-awaited crushing blow down on the skank Cummins’ head for her perjury and fraud?

2)      Will the skank finally see jail time for her mis-deeds, defamation, perjury, her perjury on top of perjury and all of the fraud she has brought to the courts?

3)      Will Amanda Lollar expand the facility even further, gaining even more notoriety, while Scummy Cummy sinks into the depths of despair never to surface again, never to buy a house again because of the now $10M Judgment that will live with her forever, never to buy a new car or marry someone else’ husband (again)?

4)      How wonderful does it feel to know that GOODNESS does indeed triumph over evil?

I know what you are thinking, “Holy cow Amanda Lollar and her talented team really have DEFEATED, STOMPED the ROACH Cummins into the ground” and is all the better for it!  Now you know what you want to do, sure, go ahead and count them again – 18 individual, separate court defeats.  Wow.

What is that song from the Wizard of Oz, oh yes:

“She's gone where the goblins go below, below, below, yo ho
Let's open up and sing, and ring the bells out loud
Ding-dong! the merry-o, sing it high, sing it low
Let them know the wicked witch is dead!” 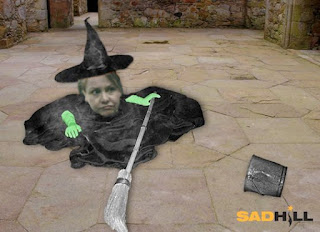